It’s a disconcerting event when one day one of your Exchange 2010 SP1 or later DAG members blue-screens. We have a wide range of emotions that accompany one of these event’s including a sense of dread and an “OH NO” sense of something wrong, since after all, it IS a critical application AND it’s meant to be highly available, and then it blue-screens, or in Microsoft talk, it bugchecks.

After you finish panicking, after all the server reboots, and it looks like everything is fine, you could be tempted to write it off. You may not have been there when it blue screened to catch the error code, and with a bit of luck it was a passing thing. Could have been a patch installing, a transient driver error or a phase of the moon. Denial is great at suggesting options after all…..

And then it happens again, and again. Seemingly randomly. By this time you may be tempted to brush up your CV writing skills, however, fear not, there are other new skills that could help out.

Your server has suffered a BSOD event, or even a few of them, and you weren’t there to witness them. You may wonder if have any options at this point? Actually you do. By default, Windows operating systems are configured to write something, and that something depending on your configuration could be a complete image of your memory at the time of the error or a summary, also known as a Mini Dump. You may review these settings by examining My Computer|Properties| Advanced System Settings| Advanced | Startup and Recover Settings. On the screen below you are able to choose the level of detail written during a BSOD aka a Bugcheck. 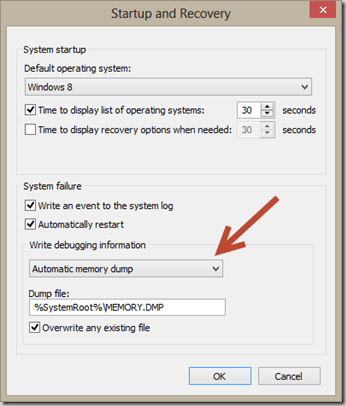 Irrespective of what kind of dump you have, lets assume you have at least one.

Tools for reading a memory dump.

Looking at our server, we can see that there have been a number of BSOD events 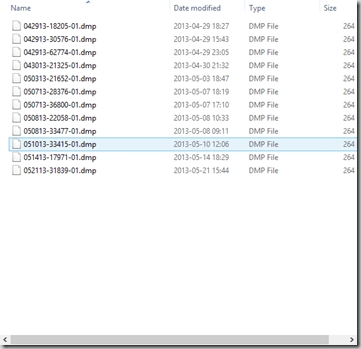 Now we need some tools specifically a Debugger. I downloaded mine by navigating to the Windows Software Development Kit (SDK) for Windows 8 page on MSDN, running the installer and choosing only the debugger.

Since I’m running Windows 8 64 bit, and I chose the 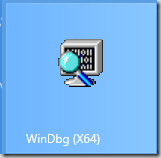 64 bit icon. At this stage one or two primers may be helpful, so for the sake of getting started and not repeating excellent content I would refer you to read both http://www.petri.co.il/bsod-troubleshooting.htm# and http://blogs.msdn.com/b/ntdebugging/archive/2009/07/27/debugging-a-bugcheck-0xf4.aspx. The first will push you out of the door, so to speak on your debugging skills, while the second will certainly raise you appreciation for what is possible using the debugger.

Moving along,  we launch our new debugger and press CTRL-S to configure the Symbol Search Path as “SRV*c:\symbols*http://msdl.microsoft.com/download/symbols”

Symbols are rather important to the readability of the output. Next Press CTRL-D to open the browse dialog for opening a dump. After finding and opening the dump, the debugger displays a bit of info and then seems to hang while it downloads the symbols required.

When it finishes, the output may be similar to the following:

Use !analyze -v to get detailed debugging information.

Depending on the version of your debugger you may or may not have the !analyze –v  hyperlink, however if you click the link or type it into the prompt on the bottom left of the debugger the result is identical.

CRITICAL_OBJECT_TERMINATION (f4)
A process or thread crucial to system operation has unexpectedly exited or been
terminated.
Several processes and threads are necessary for the operation of the
system; when they are terminated (for any reason), the system can no
longer function.
Arguments:
Arg1: 0000000000000003, Process
Arg2: fffffa8013070b30, Terminating object
Arg3: fffffa8013070e10, Process image file name
Arg4: fffff80001b8d350, Explanatory message (ascii)

From the output above we know that the event was a F4 (Critical Process Termination) and that the process directly responsible for causing the crash was “msexchangerepl“ otherwise known as the Exchange Replication Service. Remembering that we have multiple parameters ascociated with the crash, lets look at the fourth parameter,

which may hold another clue. We will do this by typing dc fffff80001b8d350 at the prompt, which gives us the following output:

Let’s recap. We know we’ve had a BSOD or bugcheck on a DAG member, and it appears that we know the cause: It’s Exchange!

Why would Exchange cause an intentional BSOD? It’s by design. 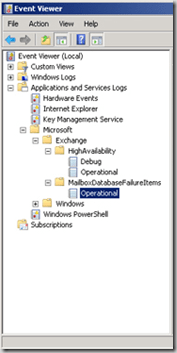 We are able to confirm this by examining the Crimson Channel, which is the Exchange 2010/2013 High Availability event log. This may be found in the event viewer under “Applications and Services logs”,  as both the “High Availability” and “MailboxDatabaseFailureItems”

Depending on the nature of the event, we may find ESE events 507, 508, 509 or 510. ESE may have logged these events due to discovering that an IO has been outstanding for longer than 4 minutes, in other words a write has not committed to disk for 4 minutes. As a result the Microsoft Exchange Replication Service (MSExchangeRepl.exe) terminate the winit.exe process, and intentionally forces a BSOD.

Assuming you have the coroborating ESE events, you are now in a position to diagnose your BSOD: There is a great likelihood that your storage subsystem was tasked with a too high IO load for too long, or that you have a storage failure.

Understanding why your server bugchecked and knowing what to do about are not the same thing. So where to next? If you have the corroborating ESE event’s you can follow Neil Johnson’s guidance on modifying the time out values.

Assuming you don’t have any corroborating event’s you may still be facing an over burdened Exchange server. You may need to change the distribution of active Databases and/or your mailbox distribution pattern. You may also need to look at the health of the OS underpinning Exchange. There may be additional event log items to support your search, specifically AV or Virtualization based events.

2 thoughts on “Blue Screen of Death on DAGs”